Connect with friends and the world around you on the Sunset Cliffs Locals network.

See photos and updates from friends in Activity Stream 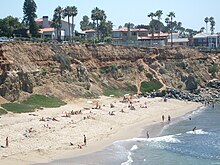 A swimming beach at the base of the Sunset Cliffs

Sunset over the Pacific Ocean, as seen from Sunset Cliffs

Sunset Cliffs is a neighborhood in the Point Loma community of San Diego, California. It is bordered by the Pacific Ocean on the west, Ocean Beach on the north, Catalina Blvd. and Santa Barbara St. on the east, and Sunset Cliffs Natural Park on the south.[1]

The area is named for the sheer cliffs which border the ocean. There are surfing spots below the cliffs. The cliffside trails are popular for walking and for watching the sunset, but are undeveloped and can be dangerous. Falls from the cliffs have resulted in deaths[2][3] and injuries.[4][5]

The main street of the area is Sunset Cliffs Blvd. The neighborhood is almost entirely residential, with curved contour-following streets and custom homes. A small commercial strip is found along the northern end of Sunset Cliffs Blvd. running into Ocean Beach. The area contains Sunset View Elementary School, part of the San Diego City Schools, as well as a private elementary/middle school called Warren-Walker School.

American Kumeyaay Indians used to travel through Sunset Cliffs to gather seafood from the intertidal areas on the beach below the cliffs. They also gathered various forms of plant life in the area.[6]

During the 1915 Panama–California Exposition, Albert Spalding developed the Linear Section of the cliffs. He spent around $2 million to hire Japanese architects to construct bridges, trails, benches and a stairway into the ocean.[6] Spalding called his estate Sunset Cliffs Park, which then lent its name to the neighborhood.[7]

In 1925, John P. Mills bought the property and surrounding area and developed it into a residential neighborhood. Mills spent approximately $1 million to restore the features created by Spalding. Later the City of San Diego acquired the Spalding property from Mills and turned the coastal strip into a city park. The creations Spalding built were affected by the weather and wave action and eventually eroded. After the features had deteriorated significantly the city deemed the area unsafe and removed all the creations Spalding constructed.[6]

Sunset Cliffs Natural Park is a 68-acre (28 ha) city park adjacent to the Pacific Ocean on the western edge of Point Loma.[8] It includes the entire strip of land immediately adjacent to the ocean, between the water and Sunset Cliffs Boulevard, as well as a larger area of undeveloped park and nature preserve on the south side of the area.[9] It was dedicated in 1983.[10] It stretches from Adair Street to Ladera Street. This coastal strip is connected to the 640-acre (260 ha) Point Loma Reserve.[8] The park includes carved coastal bluffs, arches and sea caves. From the cliffs, the California gray whale can be seen migrating annually from the Bering Sea to Baja California. The park is a popular place to view the sunset, hence the name.

The Luscomb Point area, at the end of Hill Street, is named after Happy Luscomb, a local resident who often surfed the area.[8] Luscomb point is a popular location for weddings and sunset viewing.

This information is believed to be accurate, but without any warranty.


This information is believed to be accurate, but without any warranty.